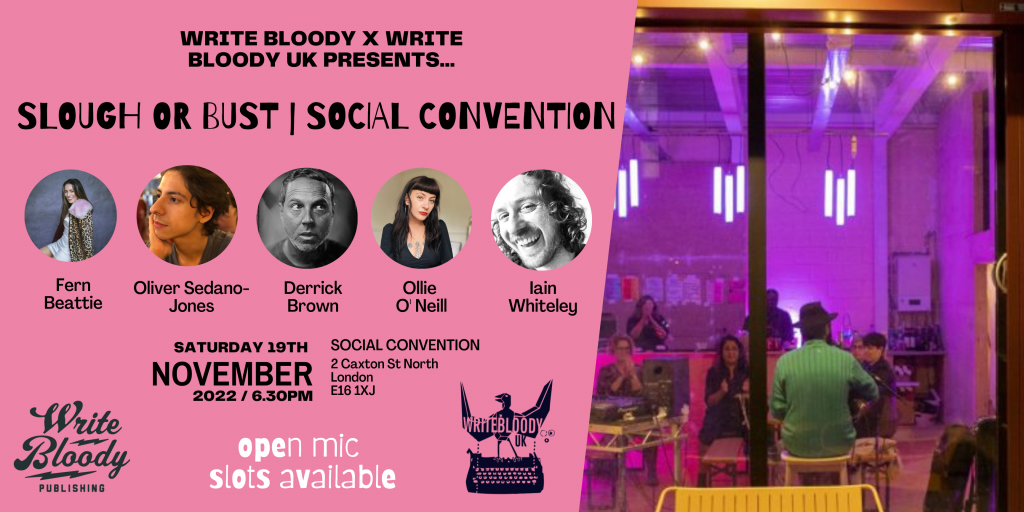 WELCOME to the Write Bloody UK Poetry tour! Write Bloody is a small press in the US, UK, and Canada – grass roots, DIY, boot strap believers who believe that great poetry changes people for the better. We believe authors should make a living and a way to do that is to create broad fan bases built from heavy touring and great looking books. Their authors are captivating at live readings and are incredible on the page to read. Write Bloody publishes some of the top selling, living poets in the world.

Join us from 6pm onwards for an open mic with Newham spoken word artists before the Write Bloody crew hits the same.

F﻿ern is the founder of Write Bloody UK. She writes mainly about what she considers her personal Four Horsemen of the Apocalypse: Women, Love, Sex & Death. Fern has released three poetry collections, The Trouble With Love (Lapwing), Pendulum and The Art of Shutting Up (Broken Sleep Books). Her writing has been published on Your Friend’s House, as well as in Belleville Park Pages, The Legendary, JUNGTFAK and Blood Tree Literature. In 2017, her spoken word piece for the short dance film Shaping Scars was officially selected for LA Dance Short Film Festival, TIFF, Korea Film Festival, L Fest & Flatlands Dance Film Festival. She is the First Prize winner of this year’s Kent & Sussex Poetry Competition with her poem “I Still Dream About My Ex-Lovers.”

Ollie O’Neill is a poet and writer from London, currently studying an MA in Writing at The Royal College of Art. She is the former National Youth Slam Champion and a Barbican Young Poet alumni, and has been published in journals such as Magma, Bath Magg, and Fourteen Poems, as well as having read her work at venues such as Soho Theatre, The Royal Festival Hall, and The Institute of Contemporary Art. In 2019 her first pamphlet Ways of Coping was published by Out-Spoken Press, a poetic research project on the pathologisation of women within the realm of psychiatry. Her debut full-length collection What We Are Given was published by Write Bloody UK, an exploration of horizontal inheritance and lineage through interpersonal relationships.

Derrick Brown is a novelist, comedian, poet, and storyteller. He is the winner of the 2013 Texas Book of The Year award for Poetry. He is a former paratrooper for the 82nd Airborne. He is the owner and president of Write Bloody Publishing, which Forbes and Filter Magazine call “…one of the best independent poetry presses in the country.” He is the author of eight books of poetry, including the most recent How the Body Works the Dark, and four children’s books. The New York Times calls his work “…a rekindling of faith in the weird, hilarious, shocking, beautiful power of words.”

Iain has worked as a writer for advertising agencies, design agencies and museums for the best part of twenty years. In 2016, he drunk-bought a “How to Write Poetry” class online and hasn’t looked back. Since then, Iain has completed an MA in linguistics and studied at The Poetry School, The Faber Academy and The Seamus Heaney Centre. Iain’s debut collection Ping! features poems that debuted in The North magazine. It was long-listed for the 2021 Welsh Poetry Book Awards.

Oliver is a British-Peruvian writer. His work is published in Banshee, Tears in the Fence, Ink Sweat and Tears, SPOONFEED and Prototype. Oliver was shortlisted for the Yeats Prize in 2018, the University of Hertfordshire Single Poem Prize in 2019 and the Wales Poetry Award 2020. His debut collection The Cardboard Sublime is one of our latest releases, out last month.